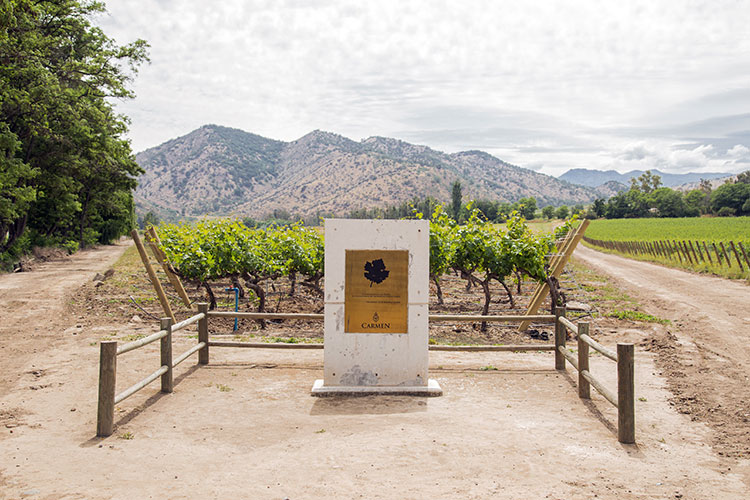 This milestone represents an enological success of great relevance in the world, which marked a before and after in the national and international wine industry and has Carmen, Chile’s first winery, as the main protagonist being the place where the variety was rediscovered.

Santiago, November 2019. Until 1859, Carménère was produced only in the terroirs of Bordeaux, in France, but it was always considered as a variety very prone to attacks from different pests. The following year, a vine parasite called Filoxera contaminated it and caused its extinction.

More than 135 years passed, until the French ampelographer, Jean-Michel Boursiquot, walking through the vineyards of Viña Carmen, located in Alto Jahuel, Maipo Valley, discovered that what was thought of as Merlot was actually Carménère. The expert recognized the variety because it was full blooming time. He noticed the leaf buds and noticed the red-orange pigmentation.

The rediscovery was an enological event of great relevance in the world, which marked a before and after in the wine industry. Following this finding, Viña Carmen became the driving force behind the development of Carménère in Chile and began marketing the product as the “lost variety of Bordeaux that nobody else had.” 25 years have passed since that rediscovery.

“Re-discovering Carménère in Chile had an enormous relevance in the history of national wine. These 25 years have been key to achieving an understanding of the variety; it is capricious and demanding in terms of the conditions of the place to give quality. Already with several years of experience and being the country that most produces this variety worldwide, we can say that we are doing Carménère with character and identity that are part of the DNA of Chilean wine ”, highlights Emily Faulconer, Winemaker of Viña Carmen.

THE NUMBERS BEHIND CARMENERE

Chile currently has the worldwide leadership of planted areas of Carménère with about 10,250 hectares, labeling the largest number of bottles with this variety. Today, Carménère is positioned as the fourth most planted grape in Chile, according to the viticultural cadastre prepared by the Agricultural and Livestock Service (SAG), where the hectares of this variety correspond to 7.5% of the total national plantation.

In addition, in 10 years (2007-2017), the Carménère plantation in Chile grew by 41%, with the highest territorial concentration found in the central valleys of Chile, especially in the O’Higgins regions, del Maule and Metropolitana.

THE WINE TO COMMEMORATE THE REDISCOVERY

Inspired by this celebration, Viña Carmen has launched a second wine in commemoration of this milestone, called V Lustros (the previous version was for the 20 years of rediscovery, called IIII Lustros). The name is due to the fifth celebration of a “lustro”, a period of five years. Coming from Apalta, this wine made by Emily Faulconer, is a deep carmine red color.

“It is concentrated and viscous. The nose is elegant and fresh with layers dominated by black and blue fruit, also with black cherry that blends with sweet spicy notes, moist earth with hints of cocoa, graphite and tobacco. In the mouth, it is wide and of great volume, its attack is of great silkiness covering the palate of gentle and velvety tannins. In the middle of the mouth the ripe fruit appears and its vivacity leaving a wine of great varietal expression and a long persistence”, says Faulconer.

To commemorate this milestone, Carmen and Santa Rita –wineries of the same group and located in adjacent estates- will offer an unforgettable experience that blends history, exclusive wines and a unique environment; all in the same place where the close relationship between this disappeared and almost forgotten Bordeaux variety was originated and Chile.

Throughout November, the Carménère Tour will be with a 20% discount (reference price, no discount, CLP 40,000 per person). This activity begins with a horse-driven carriage ride through the vineyards to get to the Carménère monolith, which commemorates the exact place where this grape was rediscovered 25 years ago. It includes a historical visit of the oldest wineries and ends with a tasting of Carménère wines, accompanied by a table of cheeses and dried fruits.

In addition, during this month the Wine Shop will have special offerings of Carmenere wines with attractive discounts.