Carmen celebrates 23 years of the rediscovery of Carmenere 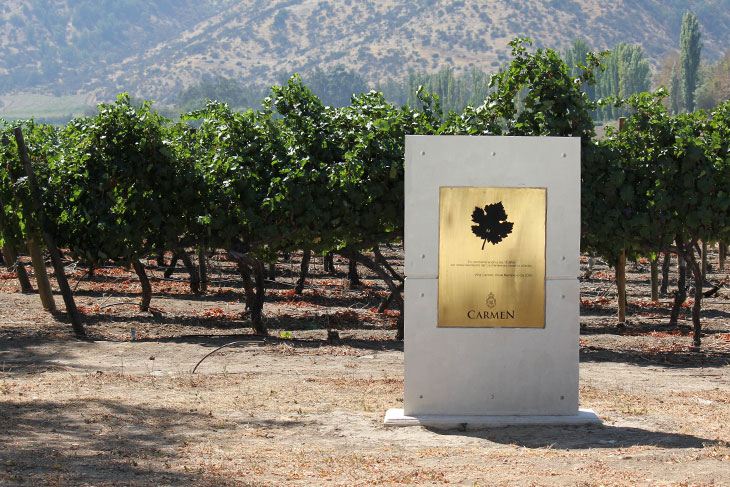 Chile, 24 November 2017.- Today, November 24, marks 23 years since the French ampelographer, Jean Michel Boursiquot, walking through the vineyards located in Alto Jahuel, Maipo Valley of Viña Carmen, discovered that what was thought as Merlot was actually Carmenere, an old and almost forgotten original variety of Bordeaux, France.

This fact would mark forever the Chilean viticulture, reason why since 2014, the Chilean wine industry, decided to promote the establishment of the Carmenere Day, inviting all wine lovers to celebrate a milestone that became an important opportunity for differentiation and development of a variety forgotten in the world.

Chile is currently the country with the most planted hectares of Carmenere and where the largest number of bottles is labeled with this variety, becoming a flagship variety for our country, for its importance, originality and contribution to the world wine industry.

THE LANDING OF CARMENERE IN CHILE

It is estimated that Carmenere arrived in Chile with the massive imports that were made of Bordeaux varieties in the 19th century (1840 to 1890), when the families that had obtained resources with the saltpeter or coal business sought to expand their activities or develop products with more social status as was wine.

In this importation of plants that brought mainly Cabernet, Merlot and Sauvignon Blanc, thousands of Carmenere plants were mixed with the rest, which at that time had stopped being produced in France, due to their adaptation problems in the Bordeaux area and their sensitivity to phylloxera, a parasite of the vine.

Years later, the wine industry began to comment that the Merlot that was produced in Chile was very different and with particular characteristics. There was even talk of a “Chilean Merlot” because of its marked difference with French Merlot.

On November 24, 1994 in Viña Carmen, the French ampelographer, Jean Michel Boursiquot, discovered that the grape called Merlot or Chilean Merlot was really Carmenere, an already extinct grape of Bordeaux.

Although in the beginning this was a scandal for the national industry, in Viña Carmen – where the identity of the grape was revealed – they decided to market the wine as the “lost variety of Bordeaux that nobody else had”.

Thus, in 1996, Viña Carmen bottled a Carmenere for the first time, but it did so under the Grande Vidure identity, since the Carmenere variety was not registered with the Ministry of Agriculture nor approved by law.

This wine had been harvested as Merlot in April 1994, when it was still unknown that it was Carmenere, but at the time of bottling it was already known the correct ampelographic identification of the vineyard.

In the year 1997, the 1994 Carmen Grande Vidure received a Great Gold Medal in the wine contest in Montreal, Canada, gaining the attention of the world.

That same year, the Carmenere variety was included in the list of wine producing varieties with Denomination of Origin, indicated in Decree No. 464 on Viticultural Zoning and Designation of Origin.

Among the awards that the Carmenere wines of Viña Carmen have obtained during this year are: